I was in two minds about going out the door last night with a breezy enough westerly blowing, but with the kids in bed at around 9pm I finally gave myself a good mental kick-up-the-arse to get out the door.  With low tide at 1am it was off to a mark to fish the ebb tide, and a ‘supermoon’ the previous night meant a strong set of spring tides was in effect.

I started fishing half-way through the dropping tide and there was a very strong run of current, flying along in the same direction as the westerly breeze. For 45 minutes or so I fired out a few plugs up wind, but found it hard fishing them as they were flying back in the current – any retrieval which was going to get them sub-surface felt like too fast a retrieve in the darkness.

It just felt it wasn’t a night for the plugs so I put on a Slug-go and began casting upstream and allowing it to come back to me in the fast current, again though it was difficult to get any ‘feel’ on the lure or maintain any contact as it flew past me from right to left. I had been wanting to give a floated soft plastic rig a try again, a technique I knew had worked well for others at the mark. So the Slug-go (Alewife) went onto a 3-4 foot length of fluoro below the float rig. It’s probably hard to fully see in this picture the setup but should give some idea:

I began casting the floated Slug-go rig upstream and retrieving line slowly as it floated past me in the current, until it swung around past me each time – and then retrieving it back against the current with pauses every few metres. About ten minutes in I felt some subtle resistance while retrieving the rig against the current. What I initially thought was weed then felt a bit heavier and pulled a bit of line off the reel … yahoooooo fish on! The fish put up very little resistance – I had the drag very loose and there was a few small runs but until I landed the fish I really thought it was a small fish. Then I saw it was a much better fish than it had felt and it went to 67cm on the ruler – a new best fish of the year for me. Bass never cease to amaze me, sometimes it is the bigger fish that give the smallest fight.

The fish went back in the water very well and recovered much quicker than I had expected – it is usually so much easier unhooking a fish caught on a weedless soft plastic than on a plug.  I fished on for just another half hour, the wind dropped, and the current slowed down a lot and it just felt like the window had passed so I decided to pack it in.  Just the one fish but as ever I was happy out to have found one, and a new best of the season for me.

A quick report from the last couple of days – finally the cod-on-lures monkey is off my back after landing some cod on soft plastics out west. I had tried lure fishing for cod a number of times in the past year on a friend’s boat in Cork harbour, but never could find them. We decided to take a charter trip out of Courtmacsherry, and fished a few reefs over the course of the day with both lures and bait. The lures took mackerel, cod and pollock with the bait also catching ling and conger.

Early enough into the day, after failing to find mackerel in any numbers, the skipper positioned us over a deep water reef to try for cod and pollock. I couldn’t resist trying the soft plastics, and threw out a white wave-worm with a jig head of around 40g. Ten or twenty minutes later I had a subtle enough take followed by what was the most powerful fish I’ve ever experienced; the rod hooped over and I loosened the drag after realising it had been left too tight, luckily the fish was still on and tearing line as it plummeted downwards, with head-bang type action every now and again. The fish took a number of these surging runs, and it was a few minutes before any headway was made – then the fish came up slowly but surely, and took more line a couple of times on the way up. The landing net came out and a beautiful cod of around 9-10lb came on board. I was over the moon to have found a cod on the softies and a quality fish to boot.

Over the rest of the day there was plenty more fish taken by everyone on board, and later in the day a couple of good pollock were talen on soft plastics, my best at 73cm and around 8-9lb. 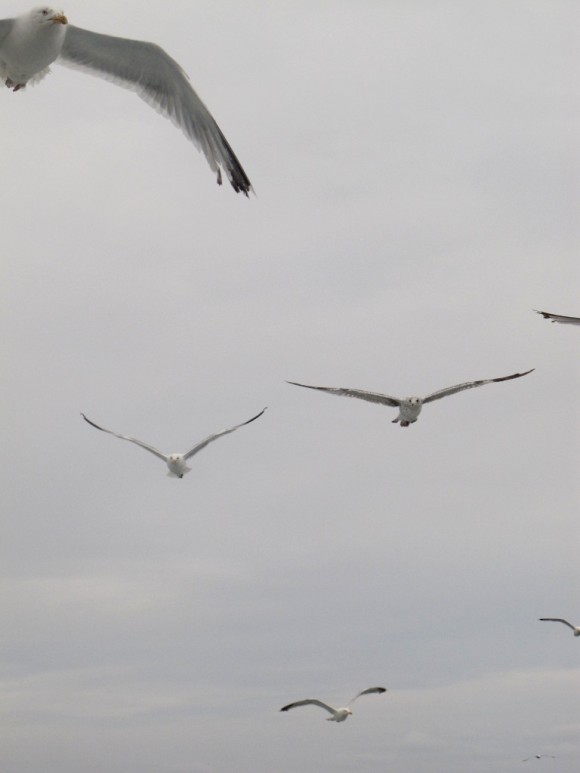 Last night I then decided to fish a night mark for bass. The conditions looked very good on arrival with light winds, not too much weed and a bit of chop on the water. As darkness fell the chop on the water died away and it became fairly quiet – so ninja mode was called for. I started retrieving the lure slower and leaving longer pauses and eventually managed two fish with another two lost. Both fish which were landed took the lure when it was stationary, and were between 55 and 58cm or so. 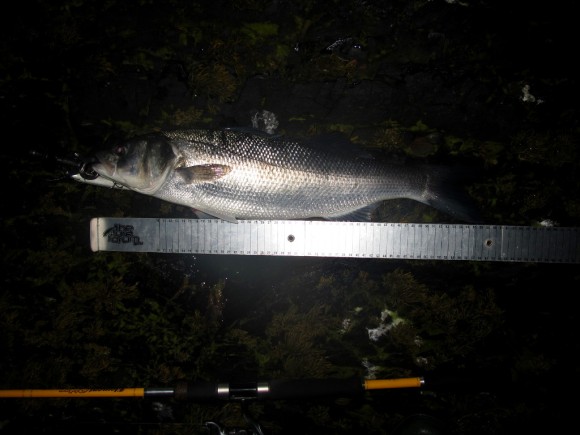